Four members of the Roberts family were interned at Palembang and Muntok. The eldest was William Frank Roberts of 86 Cairnhill Rd, Singapore.  He was one of the first to die at Palembang on 13.9.42 [61] of dysentery.

McDougall writing in his diary notes:

[Dr.] West warned working party against buying ,eating anything outside except what could be cooked or prepared in camp.

William’s wife, Elizabeth Louise ‘Freda’, daughter of  John Hazelwood, was also one of the earliest to succumb, dying of dysentery four months before her husband on 21.5.42 [50] at the Andreashim Hospital, Palembang. (Other sources have her death date as 10.5.42.)

Joyce Roberts was the youngest member of the family and the only one to survive. She was aged 17 in 1942.

The fourth member of the Roberts family was George Oliver Wales Roberts, brother of Joyce and son of William and ‘Freda’. He was Assistant Architect, Palmer & Turner, Johore Bahru. Sgt. Straits Settlements Volunteer Force (SSVF). He died 16.6.44 [29] at Muntok of beriberi. He was buried at Muntok but because of his military status as member of the SSVF, his body was later re interred at the war cemetery in Jakarta.

His death was described by McDougall as follows:

… youngest man yet to die when G.O.W Roberts 29, 4:45PM June 16 [1944] after spasms of over an hour from 7 a.m. He quieted after Prontopon injection & saltwater by mouth. Spasms similar to Morris, but Roberts continually cried loudly and hoarsely, body rigid, eyeballs turned sharply down and lids drawn back, mouth twisted, giving ghastly cast to face. Throat muscles taut, breathing cramped. He [was] conscious throughout spasms, but slid into coma several hours later and never came out – which reminds me that of all men who’ve died in our hospital, only one, Llewellyn, was conscious shortly before the end and fully aware he was about to go. Others, except heart attack victims, in apparent good health when seized were conscious from 8 to 24 hours and 48 hours before death without realizing seriousness [of] their case. [McDougall ‘If I Get Out Alive’, p. 231] 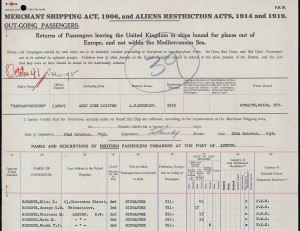