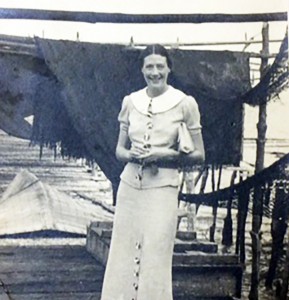 Christine Gladys (Guy) (Bundy) Cleveley was evacuated from Singapore aboard the Mata Hari, skippered by Captain Carston, and found herself a prisoner of the Japanese on 14th February 1942.

Her fate followed the same path as many of those who were aboard the Mata Hari: first Muntok, then the Irenelaan women’s camp at Palembang, followed by Muntok again, and then finally Belalau.

However. unlike many other internees, Christine survived and was able to be repatriated to Singapore then to South Africa and eventually Liverpool on the Empress of Scotland, arriving there on 3rd March 1946. She then made her way back to her parents’ home near Cardiff, Wales.

As a young woman, Christine taught Sunday school in Cardiff and her knowledge of the bible was immense.

In 1932 she met and married Alfred Bundy, a civil engineer, and accompanied him to Singapore in early 1933.

She enjoyed a typical Colonial wife’s life in Singapore: The Tanglin Club for swimming, and Raffles Hotel for dinner and dancing. She lived in a house in Pasir Panjang that was provided by her husband’s employer – the Singapore Power Company. They had 7 servants and a chauffeur too. But when the war approached she became a Red Cross volunteer. Below – Christine in her Red Cross uniform.

The following articles appeared in The Straits Times and illustrate the kinds of activities Christine enjoyed: 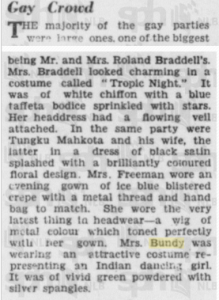 Below, Christine on the right uses scissors to cut bandages for the Red Cross and St. John’s Ambulance. 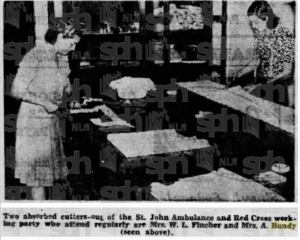 Christine was well known in Singapore circles for her dancing ability and her dress style. She was a regular dance partner of Jack Chippendale at Raffles Hotel. On 14th December 1940 The Straits Times noted Christine as taking part in a theatrical review as a “dancing girl” (below left) and on the 10th February 1935 she was spotted in a woolen lace frock that was based on one from the film “Little Women” (right):

If The Straits Times wasn’t busy commenting on Christine’s dress taste (below left) her health was also grist for the newspaper’s mill as the short notice on the right shows.

But the war was to put an end to Christine’s busy social life and, just as the Japanese landed on Singapore, Christine managed to slip away aboard the Mata Hari.  However, as noted, like many of the other ships heading south from Singapore into the Banka Straits the Mata Hari ran into the Japanese fleet waiting there.

As Captain Carston desperately tried to out maneuver the Japanese who were strafing the ship with gunfire, Christine’s life was saved when one of the officers on board, Norman Cleveley, threw himself on top of her, being the perfect officer and gentleman that he was. Christine responded to this courageous act by saying: ¨How dare you, we have not been introduced.¨

Below is Captain Carston (left) and Norman Cleveley. 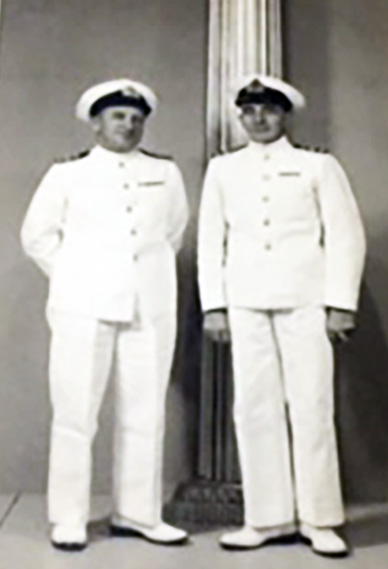 Norman acted as the Mata Hari’s radio officer as he was a Captain in the Royal Signals. He was also captured by the Japanese and held at the Mulo military prison camp at Palembang.

Remarkably Norman and Christine managed to keep in contact while they were both being held at Palembang and Muntok, which in itself was a major achievement.

Christine’s first husband Alfred Bundy was a Charge Engineer at the Singapore Power Station, a part of the Municipal Electricity Department. He was not evacuated from Singapore and was held as prisoner at Changi during the war.

Christine has been recalled by her daughter Jayne as being a very courageous women, nothing scaring her, except the dark. In the camps she was allowed to keep a bible which contained a Japanese censor’s stamp on it, and which was given to her in 1931 when she first married and was preparing to go abroad to Singapore.

While in camp Christine created a sowing box made from pieces of cloth that she used to keep needles and thread in. The box has her initials on the front (CGB) and on the top she has sown the words ‘MUNTOK’ on the left and PALEMBANG on the right. SUMATRA runs diagonally across while JAVA is above on the island itself. This is one the few artifacts that has survived from the camps.

Christine also kept a diary while in the camps which contains some recipes. Because of the near starvation conditions under which the internees lived, food was something always talked about. Christine’s diary is a very fragile document and written in pencil in a sort of scrap book. It is also one of the very rare examples of such a record of life in the camps as so few were kept and even fewer were preserved.

When liberation finally arrived in August 1945 the prisoners were being held at Belalau camp at it was Christine who had the honour and pleasure of taking down the Japanese flag. This flag is still in the possession of Christine’s daughter. It is made of silk and a little brown at the edges now. Christine was also one of the advisors to the producers and director of the film Paradise Road.

Norman Cyril Bruce Cleveley was born on 8th September 1913, his father, John, was 29 and his mother, Florence, was 24.

He was a member of the Royal Signals all his life from the age of 18 until his very early death in 1971 aged 57;  due in part to his suffering at the hands of the Japanese in camp. Norman never talked about what happened to him, but he confided some of what happened to Christine. And she has related that Norman suffered some of the classic tortures, days without water in a cage in the sun, etc. It is believed that his ill treatment might have been due to the fact he was military and a radio hack.