At Radji Beach, a little way to the north west of Muntok, an appalling event took place, which shook Australia and the world when it was known late in 1945, after the War. A group of 22 Australian nurses from the Vyner Brooke had reached the shore some distance from Muntok, together with wounded patients and a number of men – soldiers, sailors and civilians. They huddled on the sand around a fire, discussing their plight. The following day, on February 14th 1942, a group of able-bodied people walked to Muntok town to surrender while a small party went to look for help for the wounded. They soon returned, accompanied by a group of twelve Japanese soldiers.

Instead of providing help, the soldiers gestured to half of the shipwrecked men to move around a cove. After some time, the Japanese returned, wiping their bayonets and calling for the second group of men to follow.

Ernest Lloyd, a sailor from the Prince of Wales and American brewer Eric Germann were the two only survivors of this atrocity. Both later testified how they feigned death in the water as their companions were bayonetted and machine-gunned.

The Japanese next forced the Australian nurses and a civilian woman to walk together into the sea. The women were struck from behind with machine gun fire and fell, one by one. Of this group, only Nurse Vivian Bullwinkel survived; the bullet had passed through her body, missing vital organs. Stunned, she lay in the shallow water, waves washing over her, pretending to be dead until the Japanese soldiers had left. 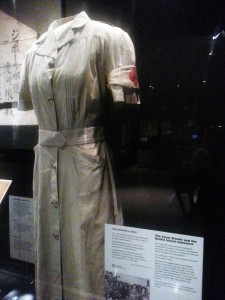 Right – the uniform worn by Vivian Bullwinkel on Radji beach.

Below, Sisters Ellen Keats (left) and Elizabeth Pyman, 10th Australian General Hospital, before the beginning of the war. Pyman reached safety in Australia on the Empire Star and Keats who was evacuated on the Vyner Brooke the next day was killed in the Bangka Island massacre.

Once aware that the Japanese soldiers had gone, Vivian looked around at her dead comrades in horror. Fearing the soldiers may return, she moved up into the jungle and hid. There she found an injured British soldier, Private Cecil George Kingsley, who had abdominal and shoulder wounds. Vivian cared for him in the jungle for 12 days, bathing his injuries and seeking food from local villagers. Finally she realised their position was too difficult and they walked to Muntok town to surrender. They were placed in the Muntok jail with the other shipwrecked victims but without proper medical care, Kingsley soon died.

Vivian Bullwinkel told her fellow nurses what had occurred but all swore secrecy to protect her life. It was feared the Japanese would kill her if it was known she had witnessed the massacre of the men and her nursing friends. She informed Australian army officer Major William Alston Tebbutt of the events, while they were both in Muntok jail, to ensure the killings were officially documented. 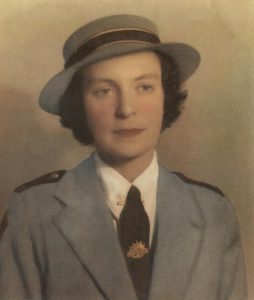 One of the nurses killed on Radji beach was Clarice Isobel Halligan (right).  She was a dedicated nurse who spent her entire career as a missionary looking after the poor and vulnerable, in Australia and overseas, before she volunteered for the Australian Army, to help the sick and wounded in Singapore. One of eight children of Joseph Patrick and Emily Watson Halligan her story can be read in more detail HERE (<— PDF).

The Australian public did not learn of the massacre until after the War when they were shocked by newspaper reports. Two examples of those newspaper articles can be read HERE and HERE.

Vivian Bullwinkel testified at the Japanese War Crimes Tribunal in Tokyo in 1946. The world then heard the full and terrible story. Her testimony can be read HERE (PDF).

Of the 65 nurses from the Vyner Brooke, 12 drowned in the Bangka Straits and 21 died when shot from behind in the water at Radji Beach. 32 nurses were interned with the civilian women in Muntok and Palembang and later at Loeboek Linggau in Sumatra.

When they reached Palemebang the surviving nurses were placed in the Irenelaan Camp that the Japanese had set up to place women and children.  The 2/10 Australian General Hospital (AGH) stayed in house 6, while nurses from 2/13 AGH and 2/4 Casualty Clearing Station stayed in house 7.

All suffered dreadfully throughout the War and 8 nurses died from sickness and starvation.

Radji Beach on Banka Island is sometimes known to local inhabitants as English Bay because of the European people who were killed there. Pieces of bone were said to wash up on the shore and residents of Bangka Island would not eat fish from this area for a very long time. The local people who had helped Vivian Bullwinkel and Private Kingsley were afraid of retribution from the Japanese and abandoned their village. The villager whose family had helped Vivian Bullwinkel and Kingsley was rewarded by the Australian government after the War.

One of the nurses, Kathleen Neuss, received a nasty shrapnel wound in the left hip when the Japanese bombed and shelled the Vyner Brooke and had to be helped by the other nurses when leaving the sinking ship.

The last letter Kath wrote to her sister was dated 16 January 1942. Her death was exactly one month later. Kath was tall and in the letter she tells her sister who had sent her a pair of shoes that:  “One thing, the Japs will never wear the shoes” (as they would have been just too big).

In 2016 her nephews, Michael and Ian, returned to Radji Beach and placed a floral tribute to the memory of their aunt and the other nurses. They also established a FaceBook page in memory of the nurses massacred on Radji Beach