Matthew Trevorrow was a gold mining engineer from St Just in Cornwall England, having travelled in his career to mines in South America, Ghana and finally Sumatra. When war broke out there are some records suggesting, (yet to be proved) that he enlisted with the British Medical Army Corps, in Jakarta after being unable, after two attempts to reach Singapore. Later, he was captured and interned as a civilian for three years in various places.

At first he was interned in Benkoelen Jail (now spelt Benkulu), and then in September 1943 those in Benkoelen were brought to Muntok Jail on Banka Island. In late August 1945 he was, according William McDougall’s diaries, ‘If I Get Out Alive’, in Belalau Camp.

This would suggest that he had remained at Muntok and then along with all the other civilian internees had been transferred from there to Belalau February / March 1945. Matthew’s name had been transcribed by McDougall’s editor, Professor Topping, as ‘Treuorrow’, which looks Dutch and hence he was not placed on the Sumatran Internees List.

In October 1945 an article in the St Just, Cornishman stated his parents had received word from him and he should be home by Christmas. In November 1945 he was seconded to join a RAPWI Team of four personnel, (Recovery of Allied Prisoners of War and Internees). Matthew was probably also asked because he could speak German, Dutch, and Indonesian.

However on 5th November 1945 he was killed by Indonesian rebels near Benkoelen , together with a Dr. Mockler. Dr. Mockler had been part of a medical team helping to release internees from the camps.

Matthew Trevorrow was taken and buried in the New European Cemetery next to Charitas Hospital in Palembang, together with Dr Mockler.  Dr Mockler’s grave was recorded as 2.C.2 in Palembang but later in the 1960’s, he was transferred to the Commonwealth War Graves Cemetery in Jakarta, plot 3, K18. At the same time, the grave next to Mockler’s at Palembang was also moved and placed alongside that of Mockler’s in Jakarta.  This second grave had a plaque reading ‘unknown soldier’ and for many years, the CWGC wrote to the Trevorrow family that they had no knowledge of Matthew’s grave.

Then, in late October 2017, after much perseverance by Matthew’s great nephew, CWGC telephoned him to say they had found a piece of paper confirming that this second Jakarta grave was in fact that of Matthew Trevorrow’s.

The report by a survivor of the 1945 attack, Captain J W Smith relates that Treverrow had been released from Belalau Camp just days before he was killed in the rebel ambush. It seems he was picked up by the liberating team, only to be killed shortly thereafter. The report can be read HERE.

Captain J W Smith also wrote an article for The Straits Times dated December 30th 1945 which can be read HERE.

Note on Dr. John Mockler: he was an Irish doctor aged 29 at the time, serving in the Indian Medical Services. His service number is M/775 and was born in Thurles, Tipperary, Ireland to John and Margaret Mockler. His grave at Jakarta is recorded HERE.

On 24th November 1945 The Sphere magazine published an article accompanied by an illustration which mentions the attack on Mockler, Smith, Trevorrow, et. al. (see below). 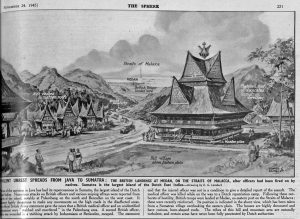 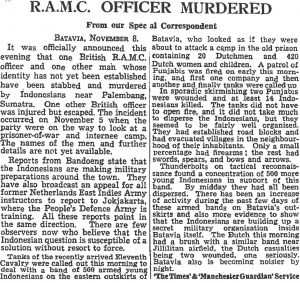 At St Just in Penwith, Cornwall, there is a War Memorial on which Matthew Trevorrow’s name appears: