One hundred and two British and Australian internees ( sixty-two men and forty women) died at Muntok between October 1943 and March 1945. In the same period over three hundred Dutch men died. Records of how many Dutch women died have yet to be consulted.

In the early 1960’s, Dutch authorities moved all their military and civilian graves to War Cemeteries in Java. Likewise some of the British and Australian dead were moved to Java, but only if their employers moved them or if they had military sounding roles in the Volunteers. These included people who were on the crew of the Empress of Asia, members of Cable and Wireless in Singapore, and a few members of the Volunteer forces.

However, for the most part, the British and Australians civilians were not moved and their graves remained at Muntok. Their respective governments said that they had no duty of care for civilian dead.  As a result, the graves of those who were left behind began to deteriorate and the wooden crosses which bore their names and dates of death started to rot away.  As a result of this lack of preservation the vast majority of the civilian internees had no named or identifiable grave and soon the local population began to build over the grave yard.

The coffins for the dead were crudely made out of bamboo and often too small to accommodate the entire body and so the corpse had to be broken in places and made to fit. Also, because so many of the civilians’ deaths were caused by wet beriberi, when the coffins were lifted on to the shoulders of the pall bearers the fluids retained by the bodies of the deceased flowed out through the bamboo cracks and over the pall bearers.

A list was maintained, perhaps by William McDougall, of the deaths of each male internee, the date of death, and cause of death. This list can be read HERE (<- PDF). 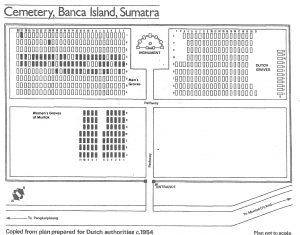 Although the conditions were harsh, meticulous records were kept of where each individual was buried and as a result we have plans of the grave site which have allowed us to reconstruct approximately where many of the Australian, British, and other Commonwealth civilians were buried.

The British and Australian men were buried in the top left area in rows  1- 27  and columns A – I. This areas is shown in more detail on the plan below. The identities of those in the graves that are filled in on the plan below are known. 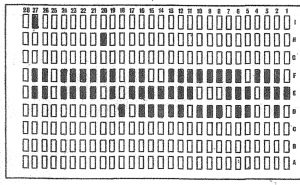 For each man we have placed his initials on the plan below indicating who is buried in which grave. For example in row F column 7 the initials GR appear which stand for Gordon Reis.

The Women’s Graves
British and Australian civilian internee women who died in Muntok were initially buried under the trees near Kampong Menjelang, then moved to the Muntok town cemetery after WW2, as shown on the plan below. This site was directly below where the men had been buried. 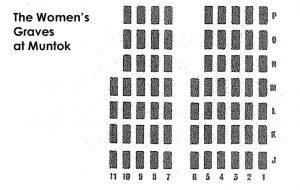 However, to make way for the new petrol station, in the early 1980’s the women are believed to have been reburied in 3 communal graves in Muntok Catholic Cemetery.  Australian army nurses, along with other military personnel, were moved to the Jakarta War Cemetery after the war. 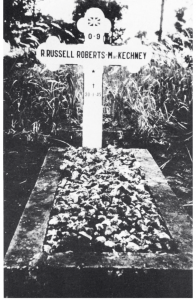 British, Australian, and New Zealand men who died in Muntok jail and were buried by their friends in the Muntok town cemetery (Dutch or Civil) . Their graves were not moved by their governments and are now built over by houses. 55 graves: 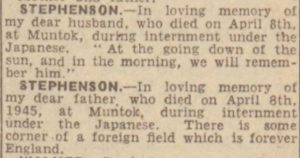 Mr Vivian Gordon Bowden (57), Australia’s Official Representative to Singapore, killed by two Japanese guards outside the Muntok cinema, 17 February 1942. The exact site of his grave, dug by Mr Bowden, is not known.

We know the following also died at Muntok but do not appear on the list above:

* STRONG, R. J. [Reginald Joseph]. Died in captivity 21.2.45 [55] at Muntok, his grave does not appear on the original schematic plan indicating where each internee was buried. However, looking at the photograph of O.M.W. Bekker’s grave we can see that Gordon Burt (Row E Column 22) is two graves to the left of Strong in the same row (E). Thus Strong is in row E20 and we indicate that on the list above.

Bekker’s grave  obscures who is between Strong and Burt but the schematic plan tells us that it is John McGuffin (Row E Column 21). Also, looking at the photograph one can just make out CR Grixoni’s grave (Row F Column 20) .

The Memorial Plaque placed on the Women’s Grave at the Catholic Cemetery – Muntok:

SOME GRAVES WERE MOVED BUT MOST WERE NOT:

Some examples of persons who died and were buried at Muntok but who were later reinterred at Jakarta by their employer (e.g. Cable and Wireless) or because they had volunteered for the military before the war include:

Thomas Henry Roberts who died of beriberi on 25.6.44 [37] and was buried the same day at Muntok. His grave is today at the Commonwealth War Cemetery at Jakarta.  McDougall in By Eastern Windows refers to Roberts as ‘Flash’.

Ernest Henry Tunn who died of dysentery on 13.1.44 [57] and was buried the same day at Muntok. (Noted in Reis’s diary and by McDougall). After the war his grave was moved to Jakarta.

The charter of the Commonwealth War Graves Commission (CWGC) allowed for the care of military graves and those who wore uniforms and who were in some style of forces, e.g. St. John’s Ambulance, the Police, etc. Why the CWGC only moved a very small number of Volunteers, no one knows. Margie Caldicott’s mother [Sehelagh (Brown) Lea] battled the CWGC for years to have the remaining graves cared for and later, when they were in disrepair, to have a memorial placed in Muntok.

At first, CWGC seemed somewhat interested but later, wrote to say that she would need to do it herself! As a former internee, whose Mother [Mary Brown] and so many friends had died and then herself married to a Minister in rural Canada, she had no resources to fund a memorial in far-off Indonesia in post-War days.

There is a folder of letters at the National Archives in Kew, UK, from Margie’s Mother to the British Home Office etc. (with replies) asking for the Muntok graves to be cared for or for a memorial to be placed – both requests declined. There is another folder labelled Muntok graves with a cover but all correspondence inside is missing! One wonders ….

Margie’s description of the graves at Muntok can be read here. It is a real credit to Margie Caldicott and all involved today (2015) that a memorial plaque has finally been placed on a site at Muntok.

Below, the graves of Colin Campbell and Gordon Reis showing their row and column numbers – E7 and F5 – respectively. They were buried close to where the Mango tree above now grows. 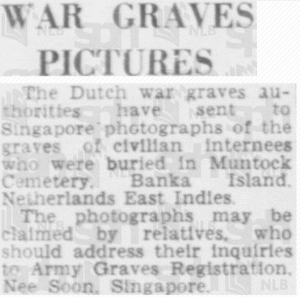 In 1981 the remains of 25 people were uncovered during the building of a Pertamina petrol station. On the first cemetery plan (above) this location is indicated as ‘Women Graves’ .

After their disinterment, the remains were given to the local Catholic priest and re–buried in a group grave in the Muntok Catholic Cemetery. In 2005 a photograph was taken of the grave as shown below: 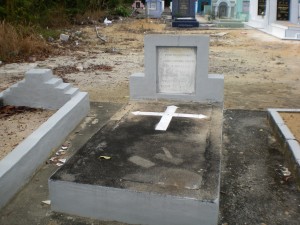 After funds were raised in 2015, the grave was repaired and a plaque listing the names of all those who had died at the Muntok camps was added as a ‘headstone’. In January 2016, a photograph was taken of the newly-restored grave by a nephew of one of the AANS (Kath Neuss)  who lost her life at Radji beach. 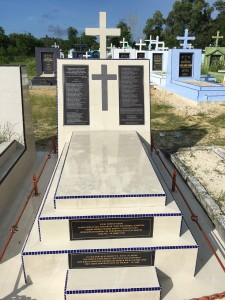 On a visit in September 2015 Anthony Pratt (son of Donald Pratt [Row E15]) and David Man (grandson of Gordon Reis [Row F16])) looked at a plan of the graveyard held by Diane Whitehead. Behind, wearing a hat, is Judy Balcombe whose grandfather Colin Campbell was also buried at Muntok [Row E7]. 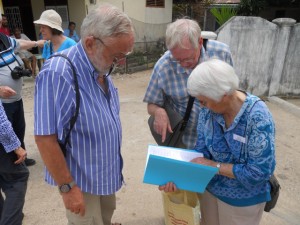