Colin Douglas Campbell was born in 1893 in Malaya (?) one of seven children of John and Elizabeth Campbell nee Gray. John was a Scottish railway engineer who had come to Malaya in 1884 to work for the Sultan of Johore on his small private wooden railway.

On leaving Raffles School, Colin became a trainee rubber planter, or ‘creeper’. He learnt how to farm rubber trees, to oversee the Tamil workers who scraped and tapped the trees daily and to manufacture sheet rubber in the estate factory. The sheets were then sent worldwide for use in tyres, road works, bridge building and many other purposes.

Now an estate Manager; he was permitted by his employer to marry. In 1921, he visited Australia on holiday and met and married Anne McGrillen from a farm in country Victoria. The Campbells returned to Malaya and Ann was introduced to the life of a planter’s wife.

Three children were born – two boys and a girl who died soon after birth.

When the two young Campbell boys reached approximately the age of 8 it was decided to send them to Melbourne to be schooled and they were taken there by their mother on a Blue Funnel Line ship.

Colin managed a rubber estate near Ipoh in Perak state where the Manager’s home was a spacious, wooden bungalow, double-storeyed and decorated with fretwork. Large, airy rooms were cooled by ceiling fans; cane easy-chairs provided leisure to sit and sip cooling iced drinks. Bright gold and crimson canna lilies were ablaze by the front steps and along the shaded verandah.

Ann Campbell was an excellent cook but with servants to shop and prepare meals, this activity was precluded her; Tamil labourers tended the garden, cutting the grass slowly with long scythes; native amahs cared for the children – there was little for Ann to do. Her industrious nature turned to embroidering fine mats and tablecloths for her home.

After visiting their sons in Australia one year, Colin and Ann returned to Malay to once more take up the comfortable life of a successful rubber Planter but this life was suddenly disrupted when in early January 1942 the Japanese began their invasion of Malaya. And, just ahead of the invading Japanese army, Colin and Ann drove to Singapore, along with many other families hurriedly crammed into cars. 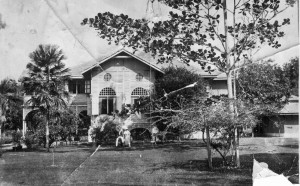 Several times Japanese planes were heard overhead, with bombs falling close by. The cars would stop and the passengers scramble out to rush and seek safety lying in roadside drains.

Although people were advised by the government that there was no need to worry and that ‘Singapore could never fall’, some women and children decided to leave. Permits were required and working men and members of the Volunteer forces were not permitted to leave.

Each departing person was allowed only one small suitcase and so many treasures were left behind. They finally reached Singapore Harbour, husbands and wives parting in fear and uncertainty on the docks.

Ann Campbell boarded the SS Narkunda on 15th January. Edging through the harbour, surrounded by smoke and flames and dodging mines in the sea, the Narkunda managed to reach Australia safely. Other boats were not so fortunate; they were bombed and sunk, with their passengers never reaching home.

Colin returned to the rubber estate. He began to burn the rubber and factory equipment so the advancing Japanese could not use it. He wrote to his wife, advising her of their shares and finances and sending his love to her and to their greatest assets, their two sons.

Sealing the letter, Colin called for the postman. A rubber estate was then like a large village, with a hospital for minor ailments, a school and its own postman to deliver the letters.

The slim Tamil man entered. Colin spoke to him gravely in his own language. ‘Thank you for always doing your work well. You know there is a War and I have to go away. Please take this money – I am sorry it is not more. Try to take care of yourself and your family. I hope that I will be able to return here soon.’

Many years later, Colin’s granddaughter, Judy Balcombe, visited the Estate and met the postman, by then an old man. He told her this story and Judy has written to say that she is happy to say his face and eyes smiled warmly with the memory her Grandfather.

In mid–February 1942, only a month after Colin had driven his wife to Singapore and her eventual safety, he made the journey again. After several days he boarded the Giang Bee and the story is taken up by the pages on this web site.

For the fate of those on the Giang Bee see the Ships page and for what happened to Colin and the other captives after being captured by the Japanese see the Arrival at Muntok page. After Muntok, the prisoners were transferred to Palembang Jail. There Colin managed to write the following card: 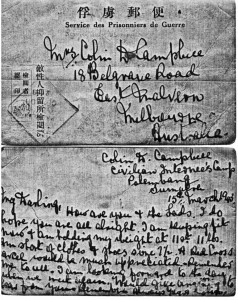 My Darling,
How are you and the Lads? I do hope you are all alright. I am keeping fit now and am holding my weight at 11 st. 11 lbs. Am short of clothes and shoes size 7 1/2. A Red Cross parcel would be much appreciated. Remember me to all. I am looking forward to the day when we meet again. Would give anything to hear from you.

The card told his family that he was alive; – or at least had been in March 1943 when it was written. Ann sent a telegram announcing the news of Colin’s internment to his sister Grace in England. That telegram was dated 24th October 1943, thus his postcard had taken 7 months to reach Australia. Until then, his family had heard nothing in the 20 months since Singapore fell in February 1942. 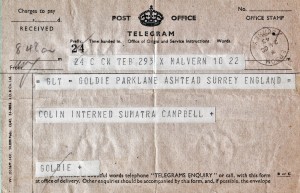 At least they now had some indication that my Colin had survived thus far. He wrote that he was fit but in need of clothes and shoes. When struggling to leave the Giang Bee, he would have cast his shoes into the water to help him keep afloat. The suitcase would have been abandoned and his clothes, if not blasted or burnt would be perishing after a year in the tropical sun.

Finding himself in Palembang jail, Colin remained there along with hundreds of Australians, Dutch, British, and other civilians for another year and a half. See The Camps at Palembang page on this web site which describes what life was like in those camps.

After Palembang, the internees were transported back to Muntok in September 1943 where for almost a year Colin managed to survive the unrelentingly harsh conditions described on the Camp and Jail at Muntok page of this website.

On 2 August 1944 Colin Campbell died aged 53, succumbing to the devastating ravages of Beri Beri and Dysentery. His body, like so many others, was placed in a coffin made from bamboo and carried by his captive friends to the old Dutch grave yard where a brief service was held and the hymn ‘Abide with Me’ was sung before the prisoners returned to the jail. Details on the Dutch cemetery can be found on the Graves at Muntok page on this website here.

It is, I am afraid, a long time since Colin died in August 1944. I gave all the details I could to the Australian representatives in Singapore after our release last September. And now I enclose the original Death Certificate, signed by Dr West and the sum of 19 pounds Australian currency, belonging to his estate.

I did not know your husband before we met in Camp, but grew to know and like him in the close proximity of internment. He was always very cheery and took everything with a smile. It may comfort you to know that we suffered no active ill – treatment at the hands of the Japs. The story was rather one of general indifference and prolonged under- nourishment. And Colin was at least spared the last twelve months of anxious waiting

I shall be returning to Malaya very shortly, and if there is anything I can do for you, please do not hesitate to write to me. 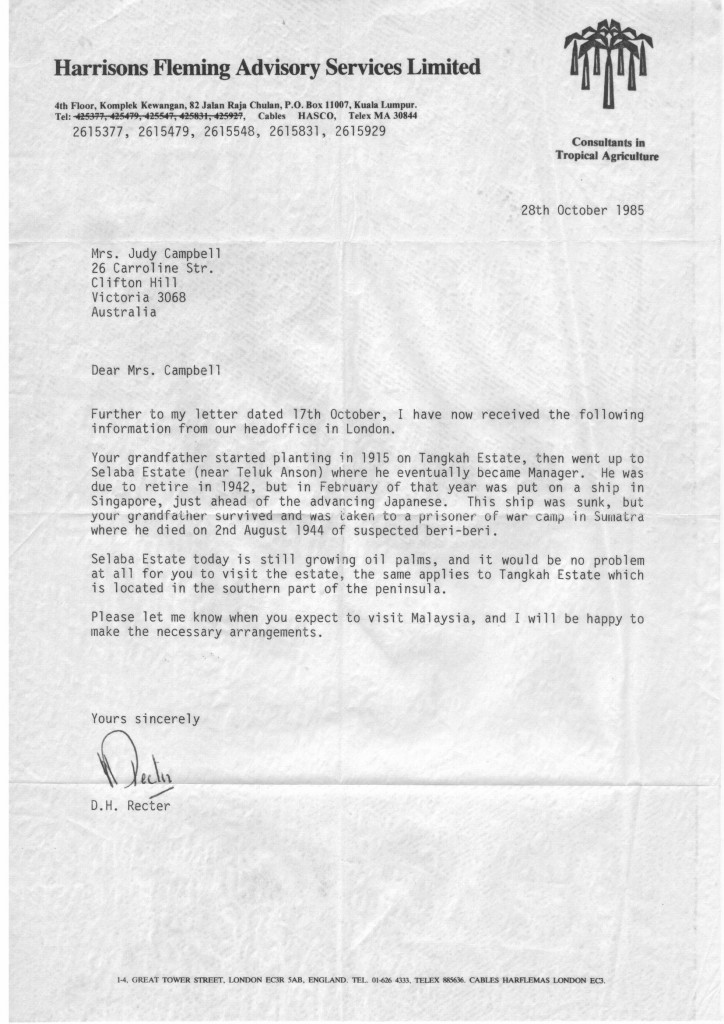