Gertrude Bean Hinch was born on 18 April 1890/1891 in Milwaukee, Wisconsin, USA.  In 1912 she graduated from Carroll College with a Bachelor of Arts degree.

She was the wife of Thomas William Hinch (1887-1970) who was the first non-missionary expatriate Principal of the Anglo-Chinese School in Singapore from 1929 to 1946 (interrupted by the war of course). 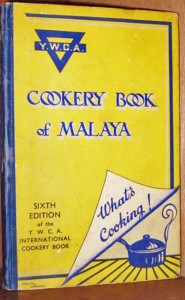 Gertrude, who even during her college days, became active in the YWCA and as such was awarded the OBE 1942. An article appearing in  the Malaya Tribune that mentions Gertrude’s OBE can be read HERE.

In 1931 she co-edited with Mrs. R. E. Holttum The Y.W.C.A. International Cookery Book of Malaya.

She was evacuated from Singapore on the Giang Bee on 13th February 1942.  Of the two surviving lifeboats from the Giang Bee we have deduced that Gertrude was in the one that landed to the north of Muntok on Banka Island. A detailed description of this journey is given by Joan Sinclair and can be read HERE. Below is a telegram received by Gertrude’s daughter Kathleen saying that her mother was believed to be in the hands of the Japanese. 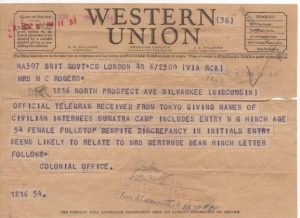 Gertrude Hinch was “…Camp Commandant in Palembang, c/o Chartered bank, London, husband in Changi…”, also “elected Vice commandant in December 1943.” Below is the letter following up on the above telegram informing Kathleen that her mother was now held a a captive of the Japanese.

McDougall wrote of her in August 1945: She is a thoroughbred patrician, dynamic & from what we heard, took nothing from Japs, but rather kept them on defensive.

In her book While History Passed Jessie Simons, who was also interned along with Hinch, writes that Hinch was: ‘….. a YWCA Representative who was in charge of British internal arrangements. Though middle-aged and not robust, Mrs Hinch upheld the best traditions, and did a great job despite odds very much against her in the struggle for better food and conditions. About the only result of her efforts was ill-treatment for herself, but this had no effect on her persistence. Seki [Japanese commander] was always difficult to deal with…’ p. 91

From White Coolies: ‘Ah Fat [Japanese guard] visits us a lot. He lives next door now in the guardhouse, so spends quite a lot of time watching the industry going on here, most of it trying to keep body and soul together. He insists on calling our new British commandant, Mrs Hinch, “Inch! Inch!” ‘

‘Mrs Hinch emerges, serene and calm, and with a most dignified, bored expression on her face asks him what he wants. Everyone who hears this of course can hardly keep a straight face until he has gone.’

Another reference to Gertrude appears in Playing for Malaysia, by Rebecca Kennieison:  “Relatively early in their captivity, the Japanese who ran the camp tried to use the Australian nurses as hostesses for a ‘club’, but without success. Somewhat later, the younger women in the camp were told they would be working outside it ‘in a club’. Gertrude Hinch, the remarkable camp leader of the English-speaking women, tackled the Japanese about this as the girls in question stood waiting. Betty overheard parts of ensuing discussion (including the words ‘Geneva Convention’) and the upshot was that only those who wanted to go were asked to step forward.”

Below a postcard sent to her daughter Kathleen: 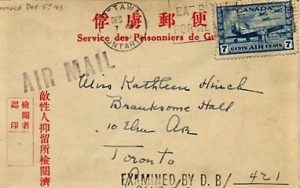 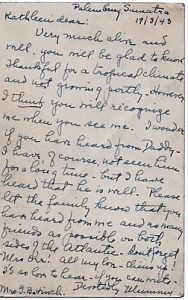 The following (also taken from White Coolies) refers to the liberation of the Belalau camp. We assume “Miss James” is Australian Army Nurse Nesta James. 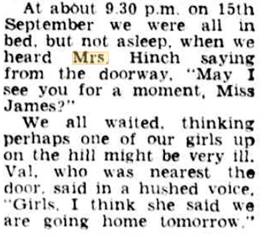 After liberation from the Belalau camp she and all the other prisoners were taken back to Singapore and from there she was repatriated on the Cilicia, arriving at Liverpool on 27.11.45. She later joined her husband back in Singapore.

While Gertrude was tackling the Japanese and defending the interests of the British women in the camps, her daughter Kathleen was in boarding school at Branksome Hall in Toronto, Canada, which had converted a home to a dormitory to accommodate a number of British war evacuees and include them as Branksome Hall students for the duration of the war. Kathleen was among those evacuated to Canada after her school was closed due to the Blitz. So by the time Singapore had fallen and her parents captured by the Japanese, Kathleen was in Canada and escaped interment by the Japanese. The war was still being fought by the time she had finished her initial schooling in Canada and her parents were prisoners. At first she had no idea what to do, but as it turned out she was awarded a scholarship to attend the University of Toronto, so she decided to go to university there, and remained in Canada for the duration of the war.

Since Gertrude Hinch was originally an American, Kathleen spent many of her school holidays in Milwaukee with American relatives, which is where she eventually met her husband William Ross Conrad. They married after she graduated from the University of Toronto.

Gertrude’s husband, generally referred to as T.W. Hinch, was captured when Singapore surrendered to the Japanese and he spent the remainder of the war in Changi. Neither Gertrude nor T.W. knew that the other was alive until the end of the war. Their daughter Kathleen, who was also uncertain whether of her parents’ during the war, was reunited with her parents shortly before she married Conrad, and they were able to attend her wedding in Milwaukee, Wisconsin.

After they were married the Conrads settled in California, until eventually retiring to Wilsonville, Oregon. Kathleen died in 2008. The following notice appeared in the Peninsula News on 24 June 2008.

Both T.W. and Gertrude returned to Singapore to re-open the Anglo-Chinese School and remained there until their retirement, at which time they returned to England and lived in Ealing, London. T.W. and Gertrude died within months of each other in the early 1970 and 1971 respectively, both at around 85 years of age.

As with many families, stories of the Hinch’s experiences in the camps were only very rarely discussed. Indeed the Hinch’s grandchildren were prohibited from asking questions or saying anything about the war around their grandparents.

Fortunately, some of the post cards and letters that the Hinchs wrote to their daughter during the Fall of Singapore, the period of their internment, and the time of their liberation from the camps have been preserved. Because Kathleen found the whole subject very difficult to talk or even think about, the fact that this correspondence existed was not discovered until after her death

Gertrude had a younger sister, Dorothy, living in Milwaukee in 1939. Below are more notes on Gertrude and her husband Thomas William Hinch:

The following tribute was paid to the late Thomas William Hinch when he retired from the principalship of the Singapore ACS in 1948, after beginning as a teacher in the Ipoh ACS in 1911, by the Officer Administering the Government of Singapore.

ACS Ipoh
Mr. T.W. Hinch was appointed Principal in March 1915 and under him the school was a model of discipline and organisation. He organised gymnastics under a trained instructor, founded a Cadet Corps, and produced a crack football team. Mr. Hinch remained as Principal till January 1920 except for a short period in 1918-1919 when he enlisted in the I.A.R.O.

MBS Kuala Lumpur
Mr. T.W. Hinch, received his appointment as Principal in 1924 and to him fell the task of finding the money and building the home for the school . . . A Scholarship Fund for the best students in the upper classes and for many poor boys was started in 1925 . . .

ACS Singapore
The period from 1928 to 1949 for the ACS Singapore, which began with the opening of the Cairnhill building by Sir Hayes-Marriot, may be regarded as an era of consolidation and achievement. The Principal closely connected with this period was Mr. T.W. Hinch (1929-1948). Under his able leadership, the School made notable successes in every sphere of school life. In the academic field, the very high standard was maintained as shown by the results of the Cambridge Examinations. In athletics and sports, the School found great incentive in the introduction of the House System in 1930. The ACS Magazine was revived in 1929, taking the place of the ACS Journal which was started in 1889. To instil greater interest in extra-curricular activities, Mr. Hinch encouraged the formation of School Societies and Clubs devoted to Geography, History, Photography and Art. This increase in general interest and the diffusion of energy into every field of school activity by the students helped to build the necessary confidence and love for the school. This we now recognise as the way for the bold expansion plans at Barker Road.

At various periods, Mr. Hinch was Education Secretary for Methodist Schools. He kept abreast of educational and social developments of the years between 1911 and 1948. From an earlier period of stern discipline he was able to change to a gentler one which was attributed to his marriage (to Mrs. Gertrude Bean, an American missionary teacher on whom later was conferred the O.B.E. for her social work) and to the birth of his daughter Kathleen.

Mr. Hinch had a rare combination of achievement in the volunteer corps, games and music in all of which he had personal achievements and leadership. These he inculcated in others. He was a traditionalist in many ways, and yet he gave Singapore ACS the motto: “The Best is Yet to Be” by using it to conclude his annual reports. What he said of Oldham could well be said of Hinch himself: “He so lived his days that others might have better tomorrows. We who are heirs of this great institution (Singapore ACS) must surely play our part. The Past we inherit, the Present we create, but to those who will Hope, Believe and Work. THE BEST IS YET TO BE”.

He was able to separate happily the official and the personal. Work was work and he encouraged creativity and originality even where it came to sacrificing the traditional. The encouragement and inspiration he gave individuals must evoke gratitude in many generations of teachers and students . . .

Hinch had a deep and rugged faith. This came cut clearly in the Chapel programmes of the ACS which he characteristically planned in advance. Indeed the booklet the Planned Chapel which I compiled owed much to the way Mr. Hinch conducted chapel in the ACS through the years. He expressed his faith and philosophy in one of his annual reports in a manner relevant to Christian education: “The interest aroused by participation in sports activities may result, and indeed we believe does result in improved class work and examination results, but that is only a byproduct so to speak. We believe that their chief value lies in the development of personality and individuality. This we feel to be the main object of the school. And it is for that reason that as a Mission School we stress the value of religious training. For we firmly believe that a man or boy has not really found himself until he has found his God.”

He knew his Bible and theology as few laymen did; and he retained a life-long interest in the work of the Bible Society in London. On the strength of working with him from 1933 to 1948 and following his Chapel addresses, I am sure that he was expressing hope in progress in this life as well as hope in the next when he said: “The Best is Yet to Be”.