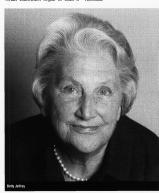 Betty Jeffrey was born on 14 May 14 1908 in Melbourne, Australia. AANS Nursing Sister. She was interned at Palembang, Muntok and Belalau. Author White Coolies. She died on 13.9.2000 [92]. Her obituary appeared in The Times as follows:

Enduring the horrors of Japanese internment

BETTY JEFFREY was the principal chronicler of the gallant band of British, Dutch and Australian women who for four years faced every known deprivation and humiliation as prisoners in Japanese camps in Sumatra. The British women – 15 of them – were evacuees from Malaya, China and Singapore, and were teachers and missionaries. Margaret Dryburgh, a woman then in her late fifties, matched Jeffrey in her efforts to raise morale, and many women testify to their indomitable courage.

Jeffrey’s daily food and water rations consisted of a tablespoon of boiled rice and a tiny pannikin of foetid water. She suffered food poisoning, tropical fever, beri-beri, dengue, cerebral malaria and constant, painful dermatitis. Despite this catalogue of adversities she never once succumbed to inertia, depression or despair.

She nursed women of all nationalities, and when they died she dug their graves. She fought off predatory animals intent on digging up the remains and, if necessary, reburied her friends. She defied her captors; she stole from them and she mocked them when forced to bow at Tenko (roll-call) to the Japanese Emperor.

Her entire nursing career was spent in the context of war. In 1941 she set up the Darley military camp, west of Melbourne. That November she sailed for Malaya and set up an Australian army camp at Malacca on the west coast. The Japanese moved into Malaya on December 19 and the Australians found themselves in the most vulnerable battle-zone of South-East Asia.

Jeffrey’s hospital was evacuated to Singapore in January 1942. On Friday, February 13, she and a party of 50 Australian nurses, were ordered to board the hospital ship Vyner Brooke. On the second day out the ship was bombed, and those who were able swam ashore to Banka Island. Of 53 people shipwrecked, most of them women, 22 were butchered on the beach. They were shot, clubbed to death or bayoneted. This was the manner in which Jeffrey, as one of the survivors, began her imprisonment at Palembang and the various neighbouring hell camps of Sumatra.

At Palembang, she befriended an Englishwoman, the composer and singer Norah Chambers, who conducted an “orchestra” of human voices in music written from memory by Margaret Dryborough. There were no instruments, but about 20 women hummed or crooned. The choir rehearsed with the assiduous zeal of professional musicians, and gave regular concerts for several years. The repertoire included Dvorak’s New World Symphony, Beethoven’s Moonlight Sonata and Mendelssohn’s Song without Words. There was one professional singer, a British woman known as Mrs Murray, who, Jeffrey reported, “with her glorious soprano voice sang the Fairy Song from The Immortal Hour”.

Jeffrey was liberated late in 1945 by a rescue mission headed by a South African, Major Jake Jacobs. She weighed four stone and four pounds.

She found it difficulty to understand the mentality of her captors. After her release she learnt that Red Cross medicines and food and mail supplies had been withheld from the prisoners. Fresh food, locally supplied, had consistently been allowed to rot in the sun and rain. She called her captors beasts and questioned the very basis of their civilisation. However, two decades later, after visiting Japan, she modified these views and said that much of the old hatred had left her. Nevertheless, she told her biographer, Patsy Adam Smith, “You forget nothing, not a thing, from years like those.”

After her return to Melbourne, Jeffrey spent two years in hospital. On her dis- charge in 1949 she and her close friend Vivienne Bullwinkel (the sole survivor of one Banka Island massacre of 25 Australian nurses) barnstormed the countryside to raise money for the establishment of the Nurses Memorial Centre in St Kilda Road, Mel- bourne. Jeffrey was its first director.

In 1951 she visited London, where she was received by King George VI and Queen Elizabeth, by Queen Mary (the patron of various Commonwealth nursing associations) and by the Duchess of Gloucester, wife of the Royal Duke who was wartime Governor-General of Australia.

In 1954 Jeffrey published an account of her wartime experience in White Collies. The book became a bestseller in Australia and in Britain after the screening of the BBC’s series Tenko in the early 1980s. The 1996 film Paradise Road was based on the book.

Jeffrey did not nurse after the war, but instead became a caddy to her friend, the singer and champion golfer Dame Joan Hammond. She was awarded the Medal of the Order of Australia in 1987 but, incredibly, was honoured neither by the monarch or by the armed services. The Returned Services League made her a life member two months before her death.

She is survived by a sister.

It is with sadness at parting and a sense of joy that I had the privilege of a long and special friendship with Betty. She was known affectionately by her colleagues as `Jeff and by other people in the prison camp as Sister Jeff.

Betty and I were in different hospital units and met on the ship as we were being evacuated from Singapore. When our ship sank in Bangka Strait we were all, if we survived, scattered in the water and had to struggle to get to land as best we could.

Betty and Iole Harper found themselves together and had to struggle for three days in the water, resting occasionally in mangrove swamps.

They arrived in our camp sunburnt, tired, hungry and covered in bites and sores. The nurses who were already prisoners were overjoyed to see them and we couldn’t stop talking.

Sixty five nurses had left Singapore and there were 32 in captivity. Taking a great risk, Betty was to record almost every day of our captivity in her diary. This later became the book `White Coolies’ which became the factual basis for radio, television and film about women in captivity under the Japanese.

Betty’s wonderful sense of humour and her adjustment to our situation helped us all. During our imprisonment she never lost hope of eventually finding Matron Paschke and her friends. During our three and a half years of incarceration she was ever helpful and inspiring -full of fun when things were grim. I recall on one Melbourne Cup day in the camp, Betty found an old bag, slung it over her shoulder and called the odds. A lovely light-hearted moment when we were all hungry.

Betty was a much loved and valued member of our camp life and a true friend since we were released. She has always mourned her friends – we spoke of them often.

Betty was much loved – we have lost a gifted and sincere friend. My personal loss is very great and in the words of Margaret Dryburgh: `How silent is this place… a hush enfolds me, deep as I have known’.

Betty, we must continue without you but you will live on in all our hearts.